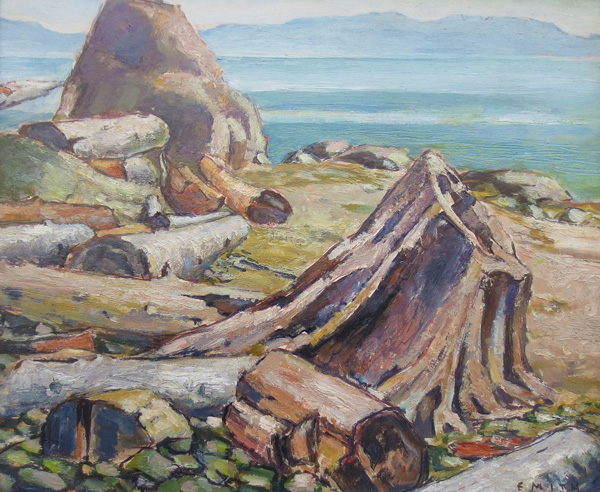 Wreck Beach, B.C., c. 1950, by Gordon Appelbe Smith, reproduced above, is an exceedingly rare work from the artist’s early period of painting the west coast landscape. The tangle of debris is a subject that had continued to fascinate Smith throughout his life. This painting reveals aspects of the artist’s work that has been consistent throughout his career; a deep pleasure in and fascination with the properties of paint, an attention to light, a remarkable sensitivity to the subtleties of colour, and a deep respect for nature. This marvelous atmospheric painting highlights the artist’s intimate connection with nature and his surroundings.

Wreck Beach, B.C, is part of a series of paintings that the artist began in 1948, when Smith painted the natural landscape not far from his home on Balaclava Street in Vancouver. The only other existing work that we are aware of by Gordon Smith that highlights “Wreck Beach” is housed in the permanent collection of the Vancouver Art Gallery in British Columbia.

Gordon Appelbe Smith was a significant figure in Canadian art and a beloved west coast artist. Born in East Brighton, England in 1919, Smith came to Winnipeg in 1933 where he enrolled at the Winnipeg School of Art. Smith’s connection with British Columbia was deep. It began in 1940 when on a holiday visit to Vancouver he met his future wife, Marion Fleming. After their marriage in 1941, Smith, who had joined the military in 1939, served overseas and was badly wounded in 1943 during the Italian campaign. Following his lengthy convalescence, the Smith’s settled in Vancouver. Gordon Smith returned to his education, which had been interrupted by the war, and in 1945 he enrolled at the Vancouver School of Art. Smith went on to have a long and distinguished career as an artist.

Gordon Appelbe Smith had his first professional exhibition in 1938. His artistic career included two major retrospectives at the Vancouver Art Gallery, more than 25 solo exhibitions at the Equinox Gallery, participation in biennial exhibitions in Canada and Brazil, as well as significant commissions including the design of the Canadian Pavilion for Expo ’70 in Osaka, in collaboration with Arthur Erickson. Smith received many awards over the course of his career including the Order of Canada in 1996, the Order of British Columbia in 2000, the Governor General’s Award in Visual and Media Arts in 2009 and the Audain Prize for Lifetime Achievement in the Visual Arts in 2007. The artist passed away in 2020 leaving a huge artistic legacy to Canada.