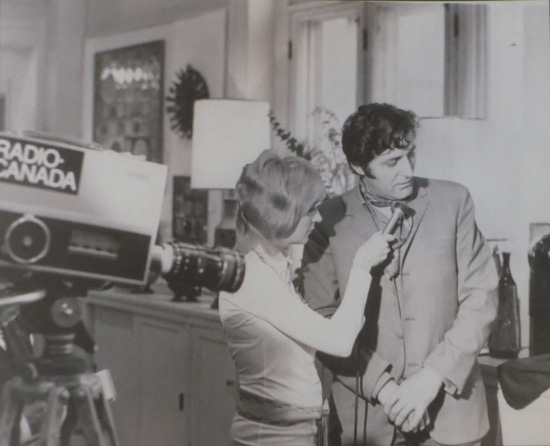 Charles Sucsan in 1966 at Radio-Canada interview

We are deeply saddened to share the news of the passing of our friend and fantastic Canadian artist Charles Sucsan, who just missed his 90th birthday. The 89 year old artist had a youthfulness about him, Charles was a person full of passion and joy, and these terrific qualities were apparent in the artist’s lively compositions. Although we met Charles in his eighties, and started representing his work late in the artist’s life, we recognized that Charles continued to have the passion and curiosity of a young artist striving for his ultimate expression in the art he created. During our conversations, the artist expressed a great enthusiasm towards life, his family, his art making, and the world around him. These themes were recurrent in Charles colourful and dynamic compositions of family, lovers, children and nature. Charles was a terrific colourist, a visionary whose art had evolved gracefully throughout his career. Charles was aware of the international art world, its trends and fashions, but the artist chose to ignore the trends that were happening around him, as he followed his own vision of creating, producing a body of work with its own unique visual narrative. We were always amazed to recognize how far a reach his artwork had, we would receive calls and emails from Charles patrons from all over the world. And what we were amazed to learn was the sheer volume of work that the artist sold over his lifetime. The beautiful thing about Charles paintings were that they were cherished, the artists patrons loved his art and supported the artist through decades of their lives. Working with Charles I can understand how the artist’s colourful compositions filled his patrons lives with vitality, joy, and a rich colourful narrative. 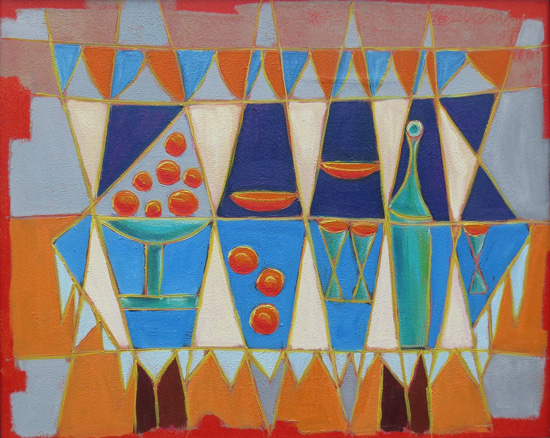 Charles Sucsan was born in Paris in 1932, of Hungarian descent. Charles family was forced to return to Hungary at the onset of World War II in 1939. The family returned to Paris after the war in 1948. In the following years, 1949 – 1952, Charles enrolled in both drawing and painting classes in Paris, and worked as an apprentice under ceramicist and muralist Florencio Fernandez, a close friend to Pablo Picasso. After completing his art studies in 1952 Charles left for Montreal to pursue a career as an artist. In 1954 the young artist began work with a well known design company in Montreal and won numerous prizes for his furniture designs. In 1958 Charles opened a ceramics studio with several artists and begins to design lamps, vases, sculpture and small ceramic paintings. The period of 1966 to 1974 proved to be a very productive time for Charles, producing numerous large scale murals for public spaces and buildings in Quebec, including decorative elements for the architectural complex, Habitat 67. From 1968 to 1972 Charles taught sculpture and ceramics at the Centre Culturel de Formation Professionnelle in Montreal. From 1973 onward the artist pursued his own professional painting career. Charles paintings have been exhibited in art galleries, museums and art fairs across Canada, the United States and Europe. Most recently the artist was honoured with a solo exhibition titled “World Within Worlds” held at the Quebec Government Offices in London, England in 2019. The artist’s works have been collected internationally. Charles Sucsan’s work is presently represented in both Canada and England.

We were so fortunate to get to know Charles as he was a terrific artist, and a person full of passion, joy, hope, love, and imagination. The artist’s greatest personal achievements included being a medalist at The Academic Society of Paris Arts-Sciences-Lettres and his participation in the UNESCO’s Hope and Optimism portfolio. Charles Sucsan leaves an incredible legacy of masterful artworks to Canada.