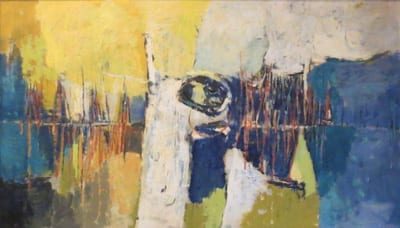 Gordon Appelbe Smith, painter and printmaker, was born in Sussex, England in 1919. He emigrated to Winnipeg, Manitoba with his family in 1933. In 1937 he studied at the Winnipeg School of Art. He exhibited for the first time in his career in 1938 with the Manitoba Society of Artists. Smith joined the Canadian infantry and was posted for service in Britain, Scotland, and then Sicily, where he was severly injured. In 1944 he arrived back in Vancouver and was discharged from the army. In 1946 he graduated from the Vancouver School of Art and began teaching there a few months later. In 1947, Smith had a solo exhibition at the Vanouver Art Gallery. In 1951, he travelled to study at the California School of Fine Arts.*

In 1955, Gordon Smith won first prize at the first Bienniel of Canadian Painting at the National Gallery of Canada for his painting Structure With Red Sun. In 1956, he joined the Faculty of Education at the University of British Columbia, also joined the Canadian Group of Painters. In 1956, he exhibited at the Guggenheim International show in New York. In 1960, he represented Canada at the Sao Paolo Bienal. In 1961, he had his first commercial show at the New Design Gallery in Vancouver and exhibited the same year at the Laing Gallery in Toronto. In the 1960’s Gordon Smith had numerous solo exhibitions at Galerie Agnes LeFort in Montreal, and the New Design Gallery in Vancouver. In the 70’s, Smith had several solo exhibitions at the Bau-Xi Gallery, Vancouver, and the Marlborough-Godard Gallery in Montreal and Toronto. In 1976, the Vancouver Art Gallery held a retrospective on Gordon Smith’s work. In the 80’s Smith continued to exhibit with Bau-Xi gallery in Vancouver and Mira Godard Gallery in Toronto. In 1994, Smith withdrew from the Bau-Xi Gallery to exhibit at the Equinox Gallery in Vancouver. In 1997, Gordon Smith had a retrospective exhibition at the Vancouver Art Gallery.*

He has participated in group exhibitions internationally and throughout Canada. In 1996, Gordon Smith was appointed to the Order of Canada. In 2001, he was appointed to the Order of B.C. for outstanding achievement. His works can be found in the collections of numerous Canadian and international museums, and corporate collections across Canada. He is regarded as one of the leading abstract artists in Canada today.*

Contact us to buy, sell or appraise artwork by Gordon Appelbe Smith.