We pay tribute to Rita Letendre, an unwavering force in twentieth century Canadian art, who sadly passed away this month at 93 years old. Her paintings will be remembered for their dramatic, energetic, bold expressions. Rita Letendre was not without her challenges growing up, born in 1928 the artist grew up in poverty in Drummondville, Quebec, and as a teen was pulled out of school by her father to look after her younger siblings. She identified as indigeneous on her mother’s side, from Abenaki descent, and as a child was teased and bullied at school for her heritage. 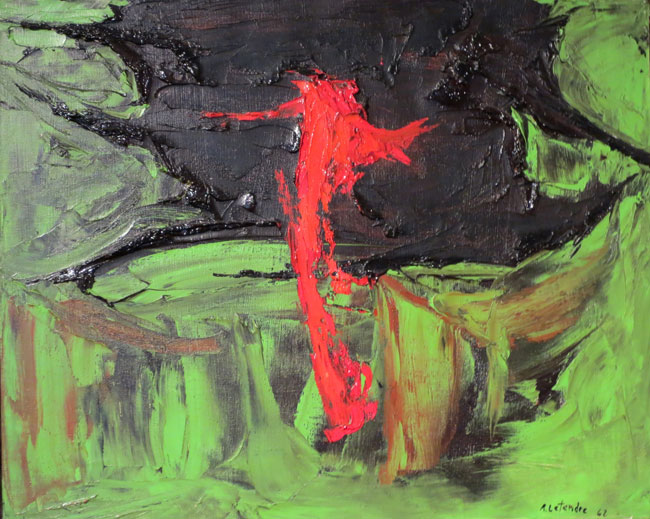 A young Rita Letendre did not let her circumstances hold her back thrusting forward to enrol In 1948 at the Ecole des Beaux–Arts in Montreal earning recognition quickly for her work. However, Letendre did not like the conservatism of the school. She was quickly introduced by a fellow student Ulysses Comtois to the Automatiste circle of artists in Montreal and their leader Paul-Emile Borduas. Borduas who noticed the strength of Rita’s work, encouraged the artist to continue on her path to create. Rita pushed herself forward into a male dominated environment of abstract painting of Montreal in the 1950’s. Her paintings began to capture the attention of the art community in Montreal and Toronto in the early 1960s. Her painting style had achieved a unique and powerful voice which stood apart from the Automatistes and Plasticien artists. Her palette knife paintings were bold, dramatic, tension driven, fast movements of light across the paint surface. From 1960 to 1964 her paintings were like thick fireballs of paint running across the surface intermingling with undercurrents of light and darkness, By 1966 Rita’s work again evolves and changes towards a more linear structured interpretation of light, emotion, colour sequences, better known as her “Highway Series” paintings. She continued this direction of her work into the 1980’s. By 1984 her work and focus changes again toward a more gestural interpretation of light, darkness, emotion and nature, and this approach carries her attention right to the end of her life.

In the 1960s and 1970s, Rita Letendre was one of only a few women artists who was awarded public art commissions, first in California, followed by a number of mural commissions in Toronto and Montreal. At one point in the 1970’s, there were twelve public art works by Letendre on view in Toronto. Her murals lit up the sides of Toronto buildings, front foyers of office buildings and ceilings of subway stations with her hallmark dash of light colliding with bright high-spirited tones to help create an optimistic feeling in Toronto.

Rita Letendre had more than sixty solo exhibitions during her lifetime and a number of exhibitions in major public art institutions. She was appointed to the Order of Canada in 2005 and received the Governor General’s Award in Visual and Media Arts in 2010, and continued painting into her 90’s. Rita leaves a huge artistic legacy to Canada through a brilliant seven decade career.