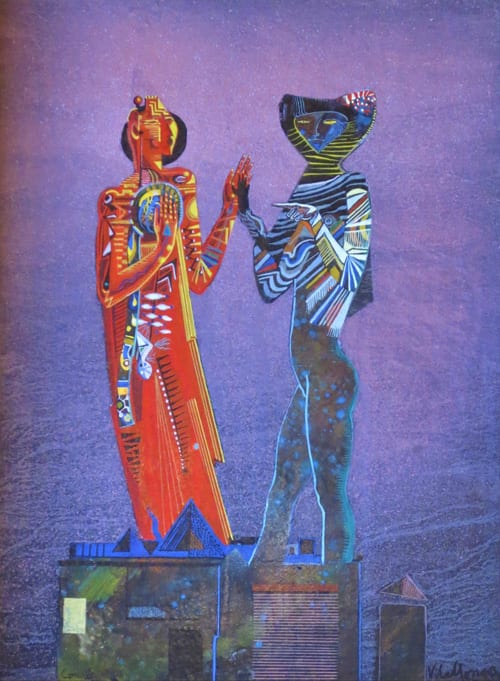 We celebrate the life and personal vision that Spanish-Canadian artist Jesus Carlos de Vilallonga has shared with Canada for over six decades. The 91 year old Vilallonga passed away on Aug. 5, 2018 in his home town of Santa Coloma de Farners, Barcelona.

Luis de Moura Sobral describes the lifelong work of Vilallonga, “Jesus Carlos de Vilallonga was a painter of ambience and atmosphere. He is also an artist of themes, the creator of a self-contained world, who moves – like a novelist or film maker – within an easily identifiable landscape: the reflection of his unique personality as creator. Stories make up his world, sometimes they are real but often they are dreams or allegories. Narrated in a frequently sad or melancholy tone, they never become tragic or violent. Throughout the artist’s career, his progressive accentuation of the oneiric qualities and the pronounced graphic structure of his compositions are as surprising as his consistent exploration of many of the same themes.” 1

As a young man in Barcelona, Vilallonga began studying architecture, but was soon sneaking in to classes at the Barcelona School of Fine Arts. His early education in architecture clearly informed Vilallonga’s later works, as he remained passionate about etching, recognizing the detail for clean lines and layered constructions in his mature works. Jesus Carlos de Vilallonga worked primarily in egg tempera, though his large body of work includes lithography, screenprinting, etching, as well as sculpture in bronze, aluminum and, more recently, a return to clay.

Vilallonga also studied in Rome, and at the École des Beaux-Arts de Paris. “As a young man in Paris, I was the happiest man in the world,” Vilallonga recounted. “What you most learn in school is what not to do; what you most learn comes from you, from your interior. When you are an artist, you are really feeling.” 2

Vilallonga came to Montreal in 1954 where he developed as an artist. He was discovered by Max Stern, owner of the prestigious Dominion Gallery in Montreal. Dominion Gallery achieved international success for Vilallonga’s work Over the thirty years Dominion Gallery managed the artist’s career, Vilallonga’s work had been exhibited throughout Canada, Europe and the U.S, most notably at the Lefevre Gallery in London, the Sagittarius Gallery in New York, Galeria Juana Mordo in Madrid, Art Contemporain in Paris, and the Galeria Dau al Set in Barcelona. He had also been honoured with extensive retrospectives at the Thousand Oaks Civic Arts Plaza in California.

During the thirty year collaboration with Dominion Gallery Vilallonga travelled between Montreal and his home/studio in Cadaqués,Spain. “There he enjoyed the company of the likes of Dalí and Picasso. “We were all there for the beauty of Cadaqués,” recounted Vilallonga. “Dalí was my neighbour and we met very often. It was a privilege to talk with him, with Dalí the writer, the talker. We had respect, Vilallonga and Dalí.” Vilallonga spoke of the parallel between Quebec and Catalunya, “both regions of cultural romance and pride and fierce longing for independence.” 3

Vilallonga was knighted in 2011 by the Prime Minister of Canada, given the title of chevalier, which few foreign born artists in Canada can claim.

Throughout his career as an artist Jesus Carlos de Vilallonga has built “an undeniably personal world where nature and artifice blend into a metamorphosis, not just limited to a presentation of the world’s beautiful side, but also its most mysterious secret emanation into the interior and exterior reality of a world which has gone beyond the physical and penetrated the psyche.” 4