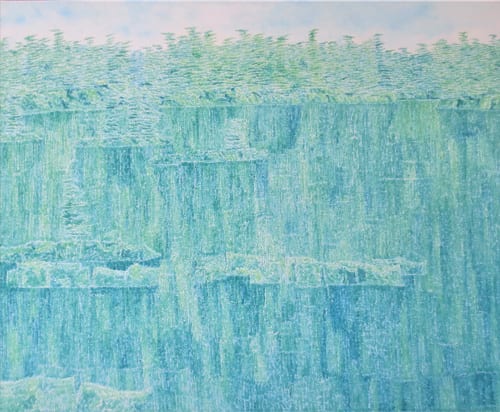 Kazuo Nakamura was a member of the Painters Eleven, a historically important group of abstract artists from Ontario who exhibited together from 1953 to 1960.

Kazuo Nakamura’s ideas and artistic expressions stood apart from his contemporaries in the group. Nakamura expressed his personal ideologies through his art, his focus of art was on nature and the universe. Ex-curator Kay Woods noted that “Nakamura’s focus was not only the closely confined landscape of the city, of the country, or of the world, but also his painting is a reflection of his image of the universe.” Some of his paintings show familiar landscape but others show the concept of nature in universal terms.” 1

For a catalogue produced on Kazuo Nakamura’s work at The Robert McLaughlin Gallery in 1974, the artist wrote that “the science of art is at its most interesting stage. Through history, in man’s search of knowledge, new thoughts such as Copernicus’ theory of solar system, Darwin’s theory of evolution, etc., have caused controversy. Art and its theory at present is a very controversial dilemma due to the lack of adequate basic theory. The standard thought of visual perception based on perspective vision can also become a doubt, as it is based on the visual illusion that parallel lines meet at a horizon: in physical existence, it does not. To analyze art is as complex as science analyzing universal structure and evolution which are based on certain logic and order. Art is not just an emotional vision but more of man’s concept or equation of his environment and thoughts. Nakamura states in the catalogue essay that “every developing phase and facet of science must produce some form of art; atomic, molecular, inorganic and organic, mental and mechanical, planetary, solar system, galaxial and the universe. As all things are made of atomic structure and motion, all shapes are based on atomic (or molecular )structure and motion. As Kazuo Nakamura sums up “Art is relative with man’s expanding and exploratory vision into inner and outer space and to its products.”2

Dennis Reid, retired chief curator at the Art Gallery of Ontario once noted that “Kazuo Nakamura was a virtuoso painter who was really after the understanding of the connectedness of things in the universe.”3