James Rottman Fine Art highlights a rare Paul-Émile Borduas painting that has not been viewed publicly since its debut in 1966 at the Musée du Québec. 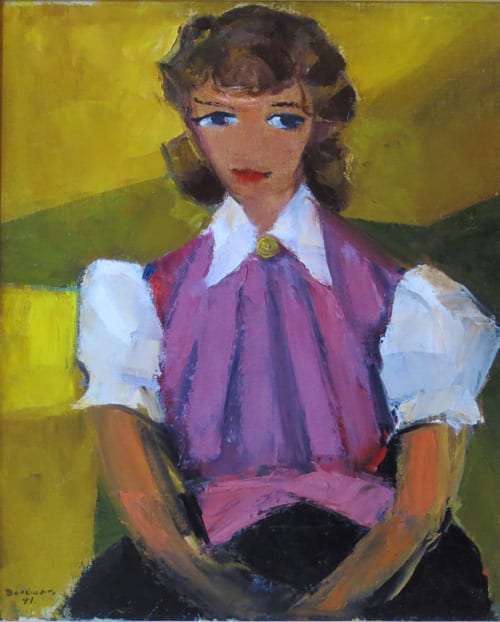 Paul-Émile Borduas’ “Le Corsage Mauve”, a gorgeous and rare oil portrait from 1941, reproduced above, has unexpectedly surfaced since being first exhibited in 1966 at the Musée du Québec. This 1966 exhibition was titled “Peinture Vivante Du Quebec, Vingt-Cinq Ans de Liberation de L’Oeil et du Geste”. “Le Corsage Mauve” by Paul-Émile Borduas was one of only two oil portraits selected by the Musée du Québec in 1966 to represent the artist. The second Borduas portrait selected to exhibit in this 1966 exhibition was the famous oil titled “Portrait of Madame Gagnon”, which was painted the same year as “Le Corsage Mauve”. “Portrait of Madame Gagnon” was acquired in 1972 by the Montreal Museum of Fine Arts. Interestingly enough both these beautiful oil portraits by Paul-Émile Borduas were originally owned by Gerard Beaulieu, an early patron and friend to the artist.

It was in 1941, the year that “Le Corsage Mauve” was created, that Borduas had established himself “as a painter to be reckoned with”, according to the glowing reviews on Borduas’ work in the historical “First Exhibition of Independants”, in the foyer du Palais Montcalm in Quebec City, 1941. There were no less than eight reviews citing Borduas’ participation in the Independants Exhibition. The reviews of the Borduas portraits in the 1941 exhibition were noted and compared to the highly praised works of Alfred Pellan.1