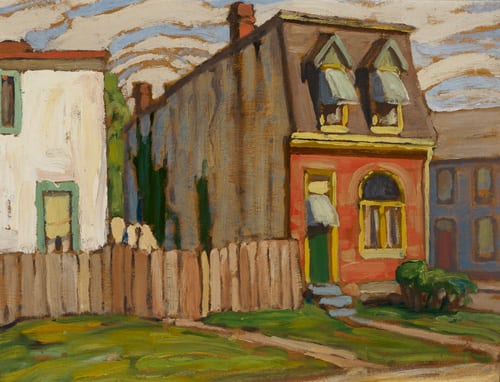 Lawren Harris, House, Toronto, c. 1920,
oil on panel, 10.5 in. x 14 in.,
signed and titled verso,
titled “Houses, Group No. XIV”, and inscribed Lawren Harris by Doris Mills on a label verso
Price: on request
Provenance: Property of Bess Harris, wife of the artist.
Collection of Howard K. Harris, son of the artist

This attractive Lawren Harris painting of a 19th century Toronto home entitled “House, Toronto,” (reproduced above) painted ca. 1920, has been recently identified by city heritage officials as an existing house in Upper Yorkville. The building – one of 25 heritage properties remaining in the neighbourhood and the last house on the street – was once inhabited by the award-winning architect Mendel Sprachman, a man responsible for designing some of the finest theatres in the country including the Elgin and Winter Garden Theatres in Toronto.

Heritage Toronto Archivist Ellen Scheinberg identified the location and uncovered the history of the home, which she found was built in the late 1880s. Her research on the property not only widens our knowledge of Lawren Harris’s interest in painting urban subjects, but also sheds light on the history of old Toronto, its early architecture, and its human demographics.

“This two-storey detached cottage is an example of Second Empire architecture,” Scheinberg writes in her research report. “It was a style that was popular in Toronto during the late nineteenth century. This charming home was intended to serve as a worker’s cottage. Its significant front yard distinguishes it from other Second Empire homes in the city.”

The most prominent resident in the home’s 130 year history was award-winning architect, Mendel Sprachman, who ran his office out of the edifice. Soon after he purchased the home around 1971, he legally changed the address of the building to 30 Roden Place. The building was added to the City of Toronto’s Heritage Property Inventory in 1973.

Artist Lawren Harris likely became interested in the house during his time spent as a resident of Yorkville. In 1910, Harris rented a studio in the neighbourhood, on Yonge St. near Cumberland Ave. Harris also joined the Arts and Letters Club on Elm Street. While a member there he met future Group of Seven artist, J.E.H. Macdonald and together they began to sketch the city’s streets and homes.

Initially, Harris made pencil sketches of hitherto neglected subjects like corner stores, backyards and workers’ houses in the nearby St. John’s Ward district. Later that year he switched to painting these same subjects. This early period of Harris’ was characterized by an interest in the patterns of urban life. His paintings were notable for the absence of any human figures.

We don’t know why Harris chose the subjects he did for his urban paintings – and whether he was primarily motivated by an aesthetic or emotional response to a subject. Or did he have a personal connection to the residents living in some of the homes he painted?

We can speculate that this specific house at the corner of Roden Place and McMurrich Street was familiar to Harris. His studio building on Severn Street was a short five-minute walk away. Harris and his friend and fellow Group of Seven member J.E.H. Macdonald likely took daily strolls through this Yorkville neighbourhood to have coffee, or lunch, at a local diner; or perhaps to just take a break from painting to get some fresh air. It is entirely possible that Harris one day walked past the front of the house at 65 McMurrich Street, where he struck up a conversation with the owner who might have been working or standing outside. Or perhaps he met the homeowner at a local diner or pub.

In his book, Lawren Harris: Where the Universe Sings, notable art historian Paul Duval writes “Although Harris painted most of his early house portraits in the small, impoverished, immigrant area of central Toronto known as the Ward, he also based a number of his best city canvases upon subjects in less deprived communities, including affluent Rosedale. In total, Harris’s house paintings span a period of some fifteen years, interrupted by other painting concerns. In terms of technique, the widest variety is to be found among his cityscapes. These range from satin-smooth surfaces to lush, heavily loaded palette knife impastos. Referring to some of his early house paintings, Harris later confessed, ‘I was totally in love with paint for its own sake, just putting it down gave me great satisfaction.’” 1 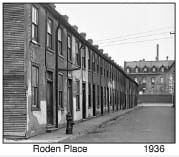 Ellen Scheinberg:
Ph.D. from the University of Ottawa
Former archivist for the National Archives of Canada
Co-Editor of “The Ward, The Life and Loss of Toronto’s First Immigrant Neighborhood”, Coach House Books, 2015.