A measure of Henry Saxe’s art is that it escapes the callipers of specifics, and, like a hummingbird, it swiftly evades our concepts of capture and confinement.1

My experience of visiting Saxe’s working studio a few years back was similar to that of mounting a Henry Saxe exhibition, a feeling of overwhelming intrigue, chance, spontaneity, a mutability of forms materializing within Saxe’s sculptural installations.

Art Critic Christopher Youngs described his experience at an exhibition of Saxe’s work at the National Gallery of Canada in 1973.

His space appeared to be a work in progress: a precarious stepladder, a coil of rope and pieces of steel were scattered about the room. This was one of the first examples of “installation art” in North America. Entering the piece, the viewer became engaged in a creative act: constructing relationships between varied components. The process was akin to the artist in his studio, drawing disparate objects together; and, like an alchemist, making them change their nature in a mysterious dance of odds meeting ends as the whole became greater than the sum of its parts. What makes art intriguing is not what is easily revealed, but the question marks that remain. So it is with our world: from our senses, we attempt to construct, to build meaning, from our surroundings.2

Henry Saxe was born in 1937 in Montreal and attended the École des Beaux Arts de Montréal (1956 – 1962). His early years coincided with the political, social and artistic upheaval in Quebec, beginning with Les Automatistes, followed a few years later by the publication of the anti-establishment, anti-religious manifesto Le Refus Global, and then by another non-figurative movement, Les Plasticiens. During this period of change, Saxe became acquainted with and developed friendships with prominent Montreal artists, Guido Molinari, Yves Gaucher, Ulysse Comtois, Jacques Hurtubise and Claude Tousignant. According to Saxe, his greatest early influences were the American abstract expressionist Willem de Kooning (1904- 1997) and the American minimalist David Smith (1906-1965). Both played an important role in Saxe’s career as he began to develop a constructivist theme that continues to this day. 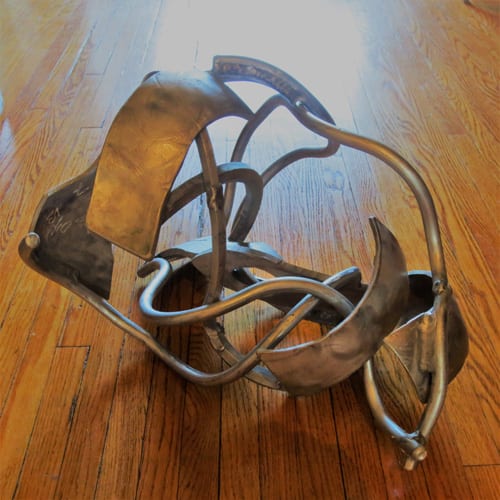 In Borromean Gymnastics (reproduced above), there is a tension between the enclosure of the whole structure and the relative liberty of the individual components. In these Spheres by Henry Saxe, there is a constant shifting between what is contained and by what. Saxe invites the participant to engage in a somewhat perverse act of hurling his spheres so that, in landing, they assume an entirely new configuration. The work is destroyed and recreated. Randomness and chance are brought into play.

Henry Saxe’s work continues to raise question marks. Like trying to unravel a magician’s layered puzzle, one can never totally comprehend a solution to the trick, but in the search, we continue to discover meaning.3

At 82 years of age, Saxe is still creating works that are relevant, reflecting the reality of our age- an absence of dynamic equilibrium. Saxe wants the participant to create their own view, their own experience, and as with society, there is no one voice, but rather fragmented experiences.