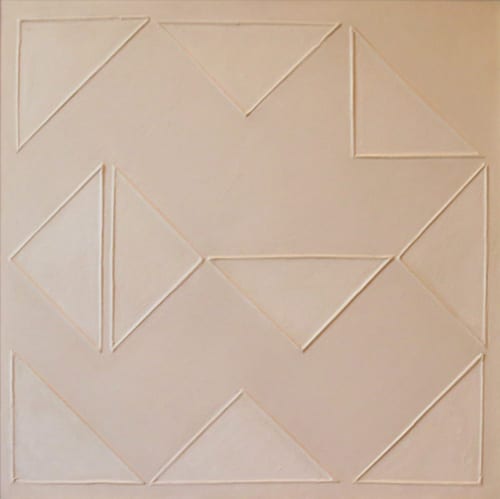 Ronald Langley Bloore (1925 – 2009), is a monumental figure in the history of Canadian post-war painting. He has left a tremendous art legacy critical to Canadian art through his magnificent paintings and his roles as an art professor, public art curator and organizer of the Regina Five. Kenneth Saltmarche, former curator at the the Art Gallery of Windsor explains Bloore’s approach to painting as creating “a silent language composed of forms arranged into significant patterns as words build sentences. Meaning is appearance: form is content. By the all-inclusiveness of meaning, Ronald Bloore’s art makes the enigmatic leap to a purer stage. Bloore feels the roots of his expression are shared by artisans from prehistory to the present. Despite the austere geometric appearance of these works the artist is a highly visual and lyrical painter. The elementary marks of the geometry retain an immediate expressiveness: the relaxed asymmetry and optimistic acceptance of accidental gestures reflect the artist’s subjective presence.”1

In Painting #15, pictured above, we admire the unique visual language and purity of form created by geometric shapes, set in a luscious cream and white coloured paint surface with lines of raised relief. Bloore achieves this seemingly flawless surface finish by using an arsenal of tools and techniques including scrapers, sandpaper, power tools, brushes, in addition to, glazing areas of the surface with several layers of paint. Painting #15 was originally exhibited at the Dorothy Cameron Gallery in Toronto in 1965. The Dorothy Cameron gallery was recognized as a gallery on the forefront of contemporary art in Canada. These 1960s and 1970s paintings by Ron Bloore, with their characteristic ridges and raised lines, are not meant to convey words and figures but rather feelings and formulations. Painting #15 is a rare and pristine example of his white on white paintings from the 1960s.

As a young artist, art academic and director of the Norman Mackenzie Art Gallery in Regina from 1958 to 1966, Ron Bloore had significant influence on the development of the local artistic community. Bloore brought national and international exhibitions to the Mackenzie Art Gallery. In 1960, as a curator and young artist, Bloore was a vital force in organizing a group of young non-figurative artists from Regina known as the Regina Five. This group, spearheaded by Bloore, was promoted to the National Gallery of Canada through an exhibition titled “The May Show”. This exhibition included five painters from Regina, Art McKay, Kenneth Lochhead, Ted Godwin, Douglas Morton and Ronald Bloore. The May show encouraged the National Gallery of Canada in 1961 to mount an exhibition titled “Five Painters from Regina”. The Regina Five’s strong approach to non-figurative painting represented a new direction for abstract painting in Canada.