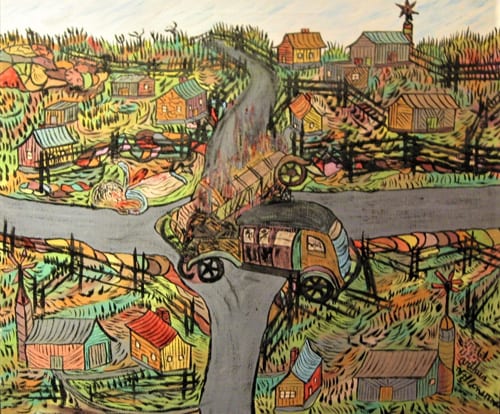 Arthur Villeneuve was born in Chicoutimi, Quebec, in 1910, to a working class family. Villeneuve worked as a barber for much of his life. His passion for art came later in his life. Villeneuve explained his late interest in art as a “manifestation of a form of divine justice.”

“Villeneuve had his own vision of the world around him. Certainly this is acutely true of Quebec where he was born and which he has painted in the style of a chronicler of old. This Chicoutimi barber-painter has interpreted every facet of Quebec life.”*

Arthur Villeneuve is considered one of Canada’s most recognized outsider or naive artists. Villeneuve did not attend art school and was a purely self taught artist. His art was not influenced by others, but rather influenced by his own life, and life experiences. Art making started as a hobby for the artist and it grew in to a vision. In 1956 Arthur Villeneuve started painting the inside of his house, covering the interior, walls and ceilings, and then the exterior of the house. Until finally in 1959 the house was completed. He called his house Le Musee d’artiste, and decided to open it to the public*.

In 1964, the ONF produced its first film on Arthur Villeneuve and his art. The film was titled Villeneuve, painter-barber. In 1972, photographs of his house were shown in Quebec, Montreal, and Vancouver. Also, in 1972, the Montreal Museum of Fine Arts organized a solo exhibition dedicated to Villeneuve’s work, entitled Arthur Villeneuve’s Quebec Chronicles. The show travelled to the Musee de Quebec, The Art Gallery of Ontario, the Vancouver Art Gallery, and numerous other Canadian museums. Arthur Villeneuve passed away in 1990, however, his naive style paintings are remembered for their purity in vision and their narrative on life in Quebec.