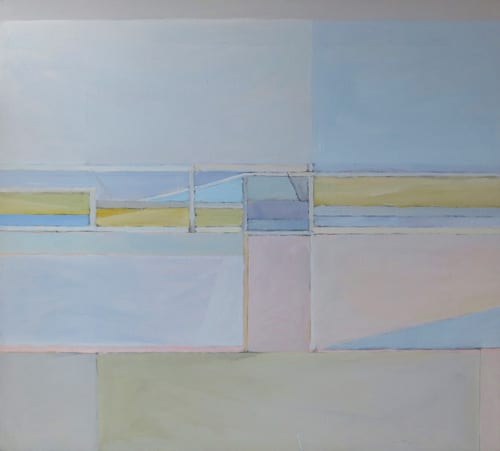 Living most of his life in Vancouver, British Columbia, Gordon Appelbe Smith’s paintings are intimately connected to the west coast landscape. In this superb painting titled Seawall – Garrow Bay, 1972, reproduced above, the composition integrates a grid like formation with a simplified landscape view. This painting is evocative of the west coast in a way his work has not been seen since the early fifties. The paint is applied in numerous layers, a glazing effect, which helps to build up a sense of inner light in a way that is different from his earlier practices. The soft colour tones of pinks, blues, purple, green and yellow used by the artist, allude to a bright sunny day at Garrow Bay where the intense light of the sun dramatically softens the richness of tones one typically sees on the west coast.

When Gordon Appelbe Smith showed these Seawall paintings in Vancouver in 1973, Smith received immediate praise from the critics. Joan Lowndes described Smith’s 1973 exhibition as “triumphant”, stating the works to be “tenderly lyrical, semi-abstract versions of the sea and shore of West Vancouver.”1 As Ian Thom, curator of the Vancouver Art Gallery explained, “the source of Smith’s inspiration, the experience of walking along west coast beaches, is conveyed in an almost subliminal way. The power of these works lies in the fact that they are both highly specific and generalized, not dealing with a particular aspect of nature but, nevertheless, convincing us that we know this landscape.2

Art critic Joan Lowndes notes “an extraordinary luminosity and deep sensitivity to the subtle harmonies of colour seen on the west coast. Smith’s handling of paint in the Seawall series is more complex than his paintings of the previous years, the glazes allow the undercoats of paint to resonate and show through.”3

Gordon Appelbe Smith once commented “artists must really use their eyes to look at the world with an intensity quite beyond the norms of daily vision. It is only through seeing acutely and clearly, that you really get to know your subject matter. Without a secure knowledge of the subject matter, artists cannot hope to come to a resolved artistic statement.” 4