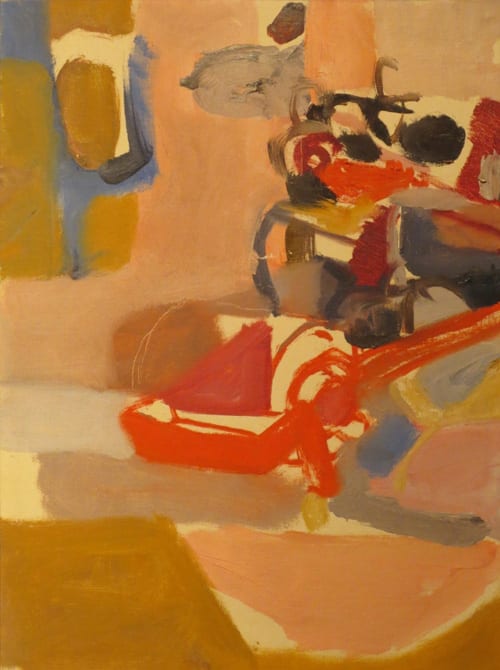 Beyond the significant art legacy that Tom Hodgson left for Canadian art, he was also an Olympic athlete. Tom Hodgson spent his youth on Toronto’s Centre Island where he developed his talents as a competitive canoeist. Tom Hodgson became a champion canoeist, representing Canada at the 1952 Olympic Games in Helsinki and again in 1956 at the Melbourne Olympic Games.

Hodgson began working in the advertising industry in 1946, maintaining a successful commercial career as a freelance illustrator, a layout artist and an art director. To further develop his fine art practice, he became a member of the Ontario Society of Artists, the Royal Canadian Academy of Arts, the Canadian Group of Painters and the Canadian Society of Painters in Watercolours. Hodgson’s works were selected to be exhibited in several of these group’s shows in the early 1950’s because of his unique and rich sense of colour, as well as the emerging interest in non-figurative art. In 1953, Hodgson was one of the seven artists who exhibited in the historically noted “Abstracts at Home” art show at the Simpson’s department store in Toronto. The exhibition was created by “Painters Eleven” member William Ronald, who eventually left Toronto to spread his wings in New York. In 1953, Hodgson also had a solo exhibition of his work at the Douglas Duncan Picture Loan Society, and Hart House Gallery at the University of Toronto. In 1955, Hodgson’s work was selected for an international exhibit at the Carnegie Museum of Art in Pittsburgh.

Tom Hodgson explored a “pop art” style of portraiture from 1965 to roughly 1972; this more figurative work was a detour from his abstract expressionism. In the late 1970’s Hodgson stepped back from the art world, losing contact with dealers and curators. It was not until 1983 and 1985 that he was offered solo exhibitions with Bau-Xi Gallery, painting again in the abstract expressionist style. In 1995, friends and family recognized Hodgson’s deteriorating health. Hodgson passed away in 2006 as a result of complications arising from Alzheimer’s disease. Tom Hodgson has been recognized as one of the early mavericks of abstract expressionist painting in Ontario and an important member of the “Painters Eleven”.