“Mead's drawing on the canvas was careful and deliberate, and at the same time there was a looseness and quirkiness about them. These characteristics made his canvases unique to Canadian art.” 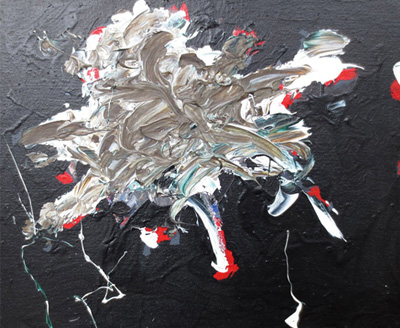 Ray Mead was a Canadian abstract expressionist painter and a founding member of the trailblazing group of abstract artists from the 1950’s, the “Painters Eleven”. Born in England, Ray Mead studied at the Slade School of Art, under the instruction of Randolph Schwabe, an architectural draftsman. Mead learned incredible skills as a draftsman, “ I learned to think rather than draw”, he says, “or to think before I drew, which is better.”

Ray Mead moved to Hamilton, Canada in 1945 and quickly developed a friendship with the older painter Hortense Gordon. Through this friendship with Gordon, Mead became acquainted with William Ronald and was invited by Ronald to show his paintings at the historical “Abstracts at Home Show” at the Robert Simpson Company in Toronto, 1952. This show was the precursor to an art movement and a collective abstract art group that called themselves the “Painters Eleven”, with Ray Mead a founding member in 1953.

In 1953 Ray Mead developed a friendship with Charles Egan of the Egan Gallery, New York, and visits the New York gallery. It is there that Ray Mead has the opportunity to see Franz Kline’s work for the first time. Franz Kline’s works at the gallery we’re drawings on telephone book pages with the type print painted out by white. He was greatly influenced by Kline, Motherwell and de Kooning. Mead’s drawings drew on the intuition and looseness of these American artists works. However, his canvases of the mid to late 1950’s we’re tighter and more structured in composition than his American counterparts, his choice of colour and composition loosely reflected the shapes of the landscape and still life. In the late 1970’s and 80’s we see a transition in his painted canvases , to a more formal approach, perhaps a response to colour field painting, flat fields of colour in simple geometric ordering. However, his canvases we’re unlike the colour field artists of the 70’s, Mead’s drawing on the canvas we’re careful and deliberate, and at the same time their was a looseness and quirkiness about it, these characteristics made his canvases unique to Canadian art.

Ray Mead had an extensive exhibition history through out his career. He had exhibited in numerous “Painters Eleven” exhibitions across Canada through out the 1950”s, including the historical 1956 New York exhibition at the Riverside Museum. Mead’s work was included in exhibitions at the National Gallery of Canada in 1956, 1972 and 1992. His work was the subject of numerous solo exhibitions in Ontario and Quebec up until his passing in 1998. Mead’s works are included in the collections of public art galleries across Canada including the National Gallery of Canada and the Art Gallery of Ontario.

Contact us to buy, sell or appraise artwork by Ray Mead.