“Pegi Nicol’s paintings were full of curving lines and dynamic colours, they have a sense of energy and immediacy. Nicol’s paintings offered a glimpse of everyday life around her, crowded city street scenes, people at work, and the bustle of daily life.” 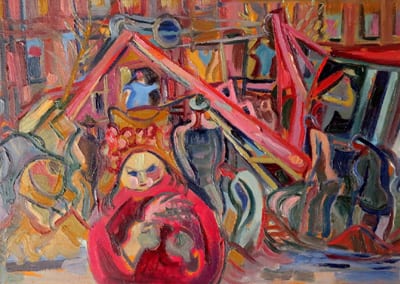 Pegi Nicol Macleod was born Margaret Nicol in Listowal, Ontario in 1904. She studied at the Ottawa School of Art with Franklin Brownell and at Montreal’s Ecole des Beaux-Arts, where she met her lifelong friend, the artist, Marian Scott. In 1927 and 1928 Pegi Nicol travelled to western Canada to paint the landscape and people of the First Nations. Her works of western Canada and the First Nations people were included in public exhibitions with Group of Seven artists.

In 1935 Pegi Nicol began to write and contribute illustrations for the Canadian Forum, becoming its art editor for a brief perod of time. She met and married Norman MacLeod, and later moved to New York City in 1937. In New York City she painted the city’s bustling street life from her apartment(studio) window, as well as portraits of her young daughter Jane. Between the years of 1940 and 1948 Pegi Nicol Macleod had often visited Fredericton, teaching a summer art course, as well as art courses at the University of New Brunswick. During WW11 Pegi Nicol Macleod accepted a commission from the National Gallery of Canada to paint the activities of the women’s division of the Canadian armed forces. She accepted this commission so that she could offer a female’s perspective on the war. Pegi Nicol completed over one hundred paintings of the war, which is now housed in the National Gallery of Canada’s collection.

Pegi Nicol Macleod was a member of the Canadian Group of Painters and the Canadian Society of Painters in Water Colour. Her early works were influenced by the Group of Seven, however, by the mid- 1930’s Pegi Nicol began to paint a more expressive style. Pegi described her style as “kaleidoscope visions”. Her strongest works were full of swirls of curving lines and dynamic colours, that had a sense of energy and immediacy. These paintings offered a glimpse of everyday life around her, crowded city street scenes, people at work, and the bustle of daily life. Sadly, her life was cut short by cancer in 1949. Her determination and talent as an artist, even against gender based barriers for women of her generation, helped propel her career to achieve national prizes and awards for her painting. In 2005, a book on Pegi Nicol’s life and career was authored by Laura Brandon, titled “Pegi by Herself, The Life of Pegi Nicol Macleod, Canadian Artist”, as well as a public exhibition of her works titled “Pegi Nicol Macleod, “ A Life in Art” mounted at the Carleton University Art Gallery, Ottawa and travelling to the Winnipeg Art Gallery, The Robert McLaughlin Gallery, Oshawa, and the Beaverbrook Art Gallery in Fredericton. In 2005, a National Film Board documentary titled “Pegi Nicol, Something Dancing About Her”, directed by Michael Ostroff, was released in conjunction with the exhibition. Pegi Nicol Macleod’s paintings were undeniably fresh and original to Canadian art of the 1930’s.

Contact us to buy, sell or appraise artwork by Pegi Nicol Macleod.