“I make up the rules of a game and I play it. If I seem to be losing, I change the rules.” ~ Michael Snow 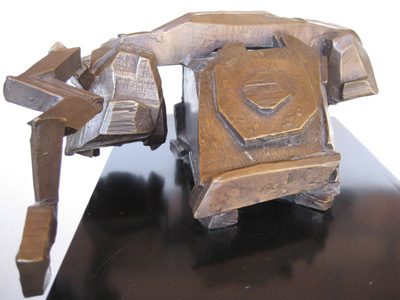 Michael James Aleck Snow was born in Toronto, 1929. He studied at the Ontario College of Art from 1948-1952. He is an internationally recognized multidisciplinary artist, well known for his painting, sculpture, music, film, photography, and books. His first solo exhibition occurred in 1956 at the Greenwich Gallery on Bay Street, Toronto, known as the Isaac’s Gallery in its later years. His first show consisted of figurative paintings and drawings, his subsequent shows of the late 50’s and 1960 focused more on abstract painting. It was 1961 when he began his iconic “Walking Woman” series that would catapult his visual arts career internationally. Exhibiting his “Walking Woman” sculpture and graphics at Poindexter Gallery, New York as well as in the physical spaces of New York city. Also, this series of work travelled to Europe and Japan.

During this early period of producing visual art Michael Snow was concurrently engaged in creating music. From 1958-1961, Snow played piano with the Dixieland trumpeter Mike White, and with his own jazz groups. Snow was attracted to free jazz or improvised music through his connection with the “Artists Jazz Band” in Toronto, and with the free-jazz movement’s leaders in New York, such as Albert Ayler, Don Cherry, etc. He performed with the Artists Jazz Band for years and was a member of the Toronto New Music Ensemble (1966-67) and a founder in 1974 of the CCMC. He also performed solo piano concerts and in groups across North America, Europe and Japan.

Michael Snow is also considered to be one of the most important contemporary experimental filmmakers, and has been the subject of many international retrospectives. With films like Corpus Callosum and Wavelength being highly praised in many countries. Corpus Callosum had been screened at the Toronto, Berlin, Rotterdam, and Los Angelos film festivals. Five of his films have been premiered at the Toronto International Film Festivals over the years. In 2000, TIFF commissioned Michael Snow with Atom Egoyan and David Cronenberg to produce short films, Preludes, for the 25th anniversary of the festival.

Michael Snow’s multidisciplinary art since the early 60’s has appeared in exhibits in Europe, North America, and South America. His works were included in shows marking the opening of the Centre Pompidou in 2000, at the MoMA in New York in 2005, and the Whitney Bienniel in 2006. Snow’s work has been shown at the Canadian pavilions at the World Fairs since his iconic “Walking Woman” sculpture was exhibited at Expo 67 in Montreal. His recent book, Biographie of the Walking Woman/de la femme qui marche 1961-1967, (2004), was published in Brussels by La Lettre Vole. It consists of images of the public appearances of his globally renown walking woman.

In 1981, Michael Snow was made an Officer of the Order of Canada and was promoted to Companion in 2007 “for his contributions to international visual arts as one of Canada’s greatest multidisciplinary contemporary artists”. He received the first Governor General’s award in Visual and Media Arts(2000) for cinema.

In 1993 The Michael Snow Project, a multivenue retrospective of Snow’s works in Toronto exhibited at several public venues and at the Art Gallery of Ontario and The Power Plant, Toronto. Concurrently his works were the subjects of four books published by Alfred A. Knopf Canada.

In 2004, the Université de Paris I, Panthéon-Sorbonne awarded him an honorary doctorate. The last artist to receive this award was Pablo Picasso. In 2002, Michael Snow won the Queen’s Jubilee Golden Medal. He won the chevalier de l’order des arts et des lettres in 1995. In 1971, Michael Snow won a Guggenheim Fellowship.

Anarchive2: Digital Snow describes Michael Snow as “one of the most significant artists in contemporary art and cinema of the past 50 years.” This 2002 DVD was initiated by Paris’ Centre Pompidou and was produced with the support of la foundation Daniel Langlois, Universite de Paris, Heritage Canada, the Canada Council, Telefilm Canada and Montreal’s Époxy. It is an encyclopedia of Snow’s works across media, browsed in a manner inimitably and artfully created by Snow. Its 4,685 entries include film clips, sculpture, photographs, audio and musical clips, and interviews.

Michael Snow continues to show his work on an international level from Canada, Europe, Asia, to South America. He has worked and taught at numerous universities across Europe and North America. He continues to produce original art and concepts with his multidisciplinary approach.

Contact us to buy, sell or appraise artwork by Michael Snow.