“Ferron’s work has the vitality of fresh discovery.” ~ Roald Nasgaard 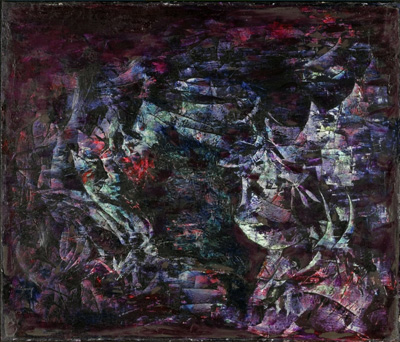 Marcelle Ferron a painter, stain glass designer, was born in Louiseville, Quebec. She studied at the Quebec École des Beaux –Arts, however, left the school before finishing her training. She felt the teachers did not provide her with satisfactory answers to her questions.*

She experimented with art for the next few years until she met Paul-Emile Borduas. Borduas became her teacher and mentor, teaching her the essence of Automatiste painting. Borduas had invited her to join the group of painters known as the Automatistes in 1946. Ferron was one of the youngest to sign the Refus global manifesto in 1948, and one of the last artists to join the group. The same year she exhibited her work for the frst time at the Librairie Tranquille. Shortly after, she exhibited again with her friend Jean-Paul Mousseau. Her work was becoming recognized in Quebec. In 1953 the group of artists known as the automatistes dissolved. Ferron decided to go to France.*

Marcelle Ferron spent the majority of the next thirteen years in Clamart, a suburb of Paris. This period was very productive as an artist. Some very influential people in the arts community in France liked her work. She had exhibits throughout Europe. The Europeans admired her work.*

She socialized in the Paris cafes, making connections with other Canadian artists settling in Paris, such as Leon Bellefleur, Jean-Paul Riopelle, Edmund Alleyn, Her stay in France was critical to her development and reputation as an artist.*

Ferron came back to Quebec in 1966. She changed her focus to stain glass for the next seven years. Her first project was a mural for the Expo 67. Her most praised mural by Quebecers was the Champs- de- Mars metro station. Many other public buildings in Quebec are adorned by her stain glass work. During this period she taught art and architecture at the Universite de Laval. In 1983 she was the first woman to receive the Prix Paul-Emile Borduas. In 2000, she was named the Grand Officer of the ordre national du Quebec. In 1961, she won a silver medal at the San Paolo biennale in Brazil. The first time a Quebec woman won this prize.*

Marcelle Ferron died in 2001. She is remembered as one of the most important Canadian abstractionists of the twentieth century.*

Contact us to buy, sell or appraise artwork by Marcelle Ferron.