“Marc-Aurele Fortin had a lifetime love-affair with his native province.” ~ Paul Duval 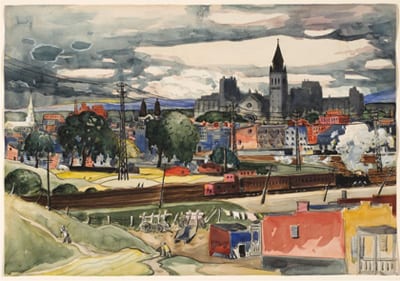 Marc-Aurele Fortin was born March 15, 1888 in Ste. Rose, then a village north of Montreal on the road to the mountains. He was one of fifteen children in his family.

He took art classes early on at the École du Plateau in Montreal and at the Monument National. Fortin left Montreal in 1907 for Edmonton as one of his brothers lived there. He began to paint and study seriously in Edmonton. He worked as a postman for two years in order to save enough money to study at the Art Institute of Chicago.  From Chicago he went to Boston and then New York to study art at the museums, galleries, and libraries.*

In 1912, Marc-Aurele Fortin returned to Montreal and lived in the old quarter. Again, he worked for Canada Post. The patriotic poetry of Albert Ferland (1872-1943) stimulated Fortin’s interest in landscape painting. He would start with watercolour painting, as they were more practical for quick outdoor sketches. Years later he would create oil paintings from his earlier sketches. From the earlier 1920’s Fortin started showing his work to the public and even selling some works. His father, a judge, recognized Fortin’s passion and accepted his son’s career by giving him a stipend. Fortin was finally able to give up his Canada Post job and paint full-time. His work at this point appeared as a joyful expression of his freedom, painting the city, the waterfront, the port, and the trees in rich colours. He experimented with etching, casein, pastel, and a number of surfaces such as wood and metal on occasion.*

With money left to him from the death of his father in 1934, he left for Europe, travelling mostly in France. In 1935 he returned to Canada and had his first one man show at the T. Eaton Co. Gallery in Montreal, where he exhibited on many occasions after. Fortin often painted in the region of Ste. Rose and around the Piedmont and Ste. Adele areas of the Laurentians.*

Fortin suffered from ill-health most of his life and was forced to temporarily stop painting in 1955. Within four years both of his legs had to be amputated. In the early 60’s he started painting from his wheelchair. He concentrated on large size works. His poor health, and inability to look after himself and his affairs led him to poverty like conditions. He had to sell his house. In 1967, feeble and nearly blind, Marc-Aurele Fortin was taken to a hospital in Micamic, Abitibi, where he died in 1970.*

Marc-Aurele Fortin’s work has been shown nationally and internationally.

Contact us to buy, sell or appraise artwork by Marc-Aurele Fortin.