“My expressions are always in a state of change. I haven’t any set style. I move as I move consciously in relation to my awareness of nature. I do not see how I can work otherwise and be true to myself.” ~ Jock Macdonald, The Inner Landscape, The Art Gallery of Ontario 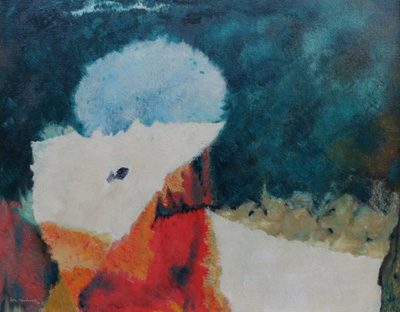 Jock Macdonald was born in Scotland, and studied at the Edinburgh College of Art. He worked as a designer for a Scottish textile company. He emigrated to Canada in 1926 to take a position as a professor at the Vancouver School of Decorative and Applied Arts.  In 1933, Charles Scott, principal of the school, decided to lower staff salaries as it was difficult to maintain the school during the depression years. When Fred Varley and Jock Macdonald heard the news they decided to resign from the school and open their own art school in the fall of 1933. They called their new school the British Columbia College of Arts, with Macdonald taking charge of the design department. In 1941, Jock Macdonald became president of the B.C Society of Fine Arts. In the fall of 1946 left Vancouver to take a teaching position at the Calgary Institute of Technology. In 1947 he accepted a teaching position at the Ontario College of Art in Toronto.*

Shortly after moving to Toronto, Jock Macdonald became a name and inspiration in the contemporary arts community. Influencing and stimulating many art students at the college. However, the majority of teachers at the O.C.A we’re still preaching the style of the Group of Seven to their students.*

In the fall of 1953, the Toronto art scene changed dramatically with the advent of “Painters Eleven” a new group of abstract artists that showed their work collectively at the Simpson’s department store in downtown Toronto. The show was called “Abstracts at Home’. It wasn’t a media or financial success, however, it was the impetus for the abstract art movement in Ontario. Macdonald was an important member of Painters Eleven as he was a teacher and mentor to several of the artists. He was painting abstracts and automatic works long before any of them, some say as far back as 1924.*

In 1954 he received a Royal Society of Canada fellowship to study and work in France. In 1957, Macdonald had a solo show at the Hart House gallery, University of Toronto.  The following year Clement Greenberg had commented to Macdonald that his work was reaching the highest calibre, comparing his work to Robert Motherwell’s. One of his works was chosen as an Ontario selection for the Guggenheim Foundation competition.  In 1958, he was asked to do a solo show at the Park Gallery, Toronto. He was at the pinnacle of his career. For the first time, Jock Macdonald’s exhibitions were generating profits for the artist. He was participating in group shows everywhere, with the Canadian Group of Painters at Isaacs Gallery, the Here and Now Gallery, Toronto, and the Westdale Gallery, in Hamilton. One of Macdonald’s work, Fleeting Breath, that was being shown at the Art Gallery of Toronto in an Ontario Society of Artists’ show, was purchased by the AGT. At the same time three of Macdonald’s works were in a Painters Eleven show organized by the National Gallery of Canada and circulating around the country. In 1960, Jock Macdonald was given a semi-retrospective exhibition at the Art Gallery of Toronto. He was the first living artist outside the Group of Seven to have this honour. From that point on, his work was in high demand by the commercial galleries. He did not have to commit to any gallery for sole representation. He showed at many galleries around Toronto and was finally making a profit from his art. He continued to teach at the Ontario College of Art as teaching and stimulating young artists was truly a passion for Jock Macdonald. He died of a heart attack in 1960. Jock Macdonald is remembered as one of the most significant and early abstract artists in the history of Canada.*

Contact us to buy, sell or appraise artwork by Jock Macdonald.