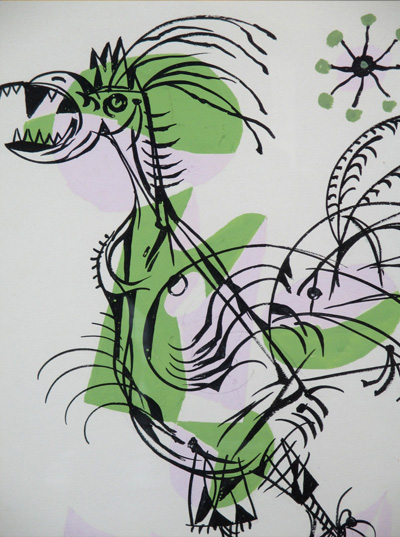 Jean-Philippe Dallaire was born in Hull, Quebec, 1916. Between 1932 and 1935, he studied art at Hull Technical School and at the Central Technical School in Toronto. In 1938-39, he continued his studies, first at the École des Beaux-Arts in Montreal, then at the Ateliers d’Art Sacré and the Académie André Lhote in Paris. After the German occupation of Paris, Dallaire and his wife were placed in an internment camp.

While his wife was released after six months, his own internment was prolonged, and the experience is said to have had a profound influence on his work. Following the war, he returned to Canada and taught at at the École des Beaux-Arts in Quebec City from 1945 to 1952. He was employed by the National Film Board as a draughtsman for filmstrips, first in Ottawa (1952-56), then in Montreal (1956-58).

He also maintained his own studio, creating large-scale canvases that show echoes of analytical cubism, and was commissioned to design tapestries. Dallaire had several solo shows in France and Canada and was awarded a Province of Quebec prize for painting in 1938. He lived in Vence, in the South of France, until his death in 1965 at the age of 49.

Contact us to buy, sell or appraise artwork by Jean Dallaire.