“Colour of course, is the single most conspicuous constant in Bush’s art.” ~ Karen Wilken, Jack Bush, 1984 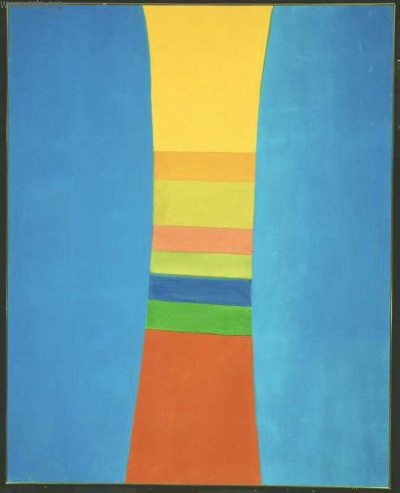 Jack Bush is a significant figure in post-war Canadian art and a member of “Painters Eleven”. “Painters Eleven” was a Toronto group of abstract painters in the 1950’s who introduced abstract art to the city. Bush achieved international success in the 1960’s and 1970’s as a colour field artist. Bush’s legacy to Canadian art is his work as an abstract expressionist and colour field artist.

In 1957, William Ronald, the only member of the “Painters Eleven” group who had moved to New York, met and persuaded American art critic Clement Greenberg to visit Toronto and spend time with each member of the “Painters Eleven” group. Bush was profoundly affected by Clement Greenberg’s visit. Greenberg saw potential in Bush’s work, however, he urged Bush to abandon his thick dragged painting of the abstract expressionists work and to simplify. As a result of Greenberg’s visit, Bush started to move toward colour field painting.

Jack Bush was a superb colourist. His works have been compared to the works of American painter Kenneth Noland. Bush was able to build structure with his use of colour. Bush’s works always looked alive and more expressive than the more geometrical and symmetrical works that had gained popularity in this period of painting.

Bush’s popularity grew throughout the 1960s, both in Canada and abroad. Important galleries in New York, Andre Emmerich and the Robert Elkon Galleries, gave him solo exhibitions. Galleries in the U.K exhibited his works. In 1964 his works were included in Clement Greenberg’s Post Painterly Abstraction exhibition, organized by the Los Angeles County Museum and travelled to Minneapolis and Toronto. In 1967, Jack Bush and Jacques Hurtubise represented Canada at the São Paulo Biennial. The Museum of Fine Arts in Boston held a solo exhibition of his work in 1972. He was collected by major museums in Canada and abroad, among them was the Tate Gallery in London. In 1976 The Art Gallery of Ontario honoured Jack Bush with a retrospective exhibition of his mature abstract painting. This exhibition toured to major Canadian museums. The National Film Board produced a film documentary based on the exhibition. He died in January 1977, having just returned from the opening of his retrospective at the Edmonton Art Gallery. Jack Bush’s work has affected the way we view post-painterly abstraction in Canada, and has influenced many of our younger generation artists.

Contact us to buy, sell or appraise artwork by Jack Bush.