“She never stood still, never looked back and never ceased to give to others, a truly creative artist.” ~ Hans Hofmann, American artist 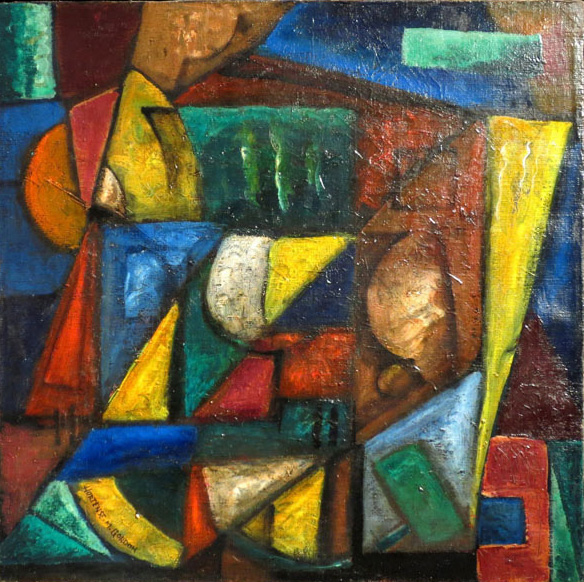 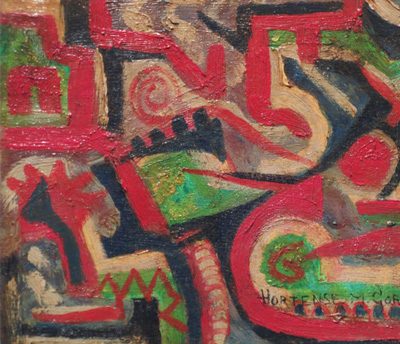 Hortense Gordon received attention as a professional artist before most of her fellow Painters Eleven artists were even born. In 1909 the Ontario Society of Artists chose to exhibit Hortense Gordon’s landscape painting titled “Early Morning in the Cornfield” (1908) for its spring show at the Art Museum of Toronto, now known as the Art Gallery of Ontario.

Hortense Gordon had focused on figurative painting “until the latter part of the 1920’s, and then found herself in a creativity quandary, thanks in part to the influence of two of her contemporaries”, Bertram Brooker and Kathleen Munn. These two artists were among the first of Canada’s abstract painters.

In 1922 Hortense Gordon and her husband John Sloan Gordon, a well known Canadian artist in his own right, decided to travel to France to paint and study European art. Hortense would visit the galleries and exhibitions in Paris, enthralled by what she saw and excited to expand her own approaches to art. The Paris art scene was influenced by new ideas – Fauvism, Cubism, Dada, Surrealism and Bauhaus concepts. Hortense Gordon started moving away from her traditional painting style to ideas of impressionism, and then later in to Cubism and abstraction. It was not until the 1930’s after a few more trips to France and her discovery of Piet Mondrian’s work that elements of abstraction began to appear in Hortense’s work. Starting then and continuing in to the 1940’s, Hortense Gordon “refined her composition of abstract shapes and forms, and her work achieved greater authority. Design became instinctive to her through the principles of “harmony, balance and rhythm.”

Hortense Gordon met Ray Mead in the 1940’s at the Art Gallery of Hamilton and became his valued mentor. Mead later said, “she was my great educator in a way. She had a lot to teach me.” And they became great friends through out the rest of her life. Ray Mead invited Hortense Gordon to the first meeting of Painters Eleven in 1953 where she found like minded artists who were exploring different themes of abstraction. Gordon was almost seventy when she joined the Painters Eleven. Painters Eleven gave her welcome support and respect. Hortense Gordon worked on a smaller scale than the others, especially Ronald, Town and Hodgson. Her paintings were quieter than many of the other Painters Eleven artists whose grand gestures and swaths of colour swept across the canvas. Gordon’s colours and compositions did grow increasingly dramatic with time. Hortense Gordon’s paintings were exhibited in “Painters Eleven” exhibitions from 1953 – 1960, including the important “Twentieth Annual Exhibition of American Abstract Artists” held at the Riverside Museum in New York in 1956. Hortense Gordon died of emphysema in November 1961 at the age of seventy-five. In 1963 the Art Gallery of Hamilton mounted a retrospective exhibition of Hortense Gordon’s work.

Hans Hofmann, the important American artist who Hortense Gordon studied under in Provincetown, Massachusetts, stated in his tribute to the artist “ Hortense Gordon was indeed an extraordinary person, always directed toward the future and progress in life and art, and determined to do her very best in her work, and the results and consequences have been remarkable and beautiful.”

Contact us to buy, sell or appraise artwork by Hortense Mattice Gordon.