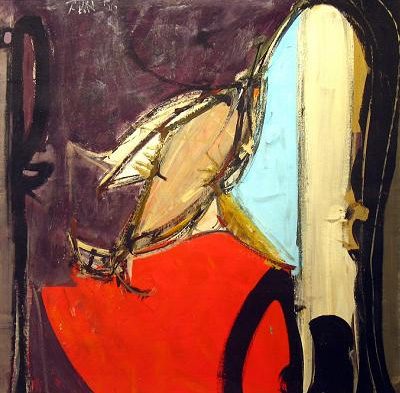 Harold Town  studied at the Ontario College of Art. After he graduated, he went on to make his living by doing store displays and illustration work for Macleans, Mayfair and other magazine covers. He worked as a commercial artist up until he was thirty years old.

In 1953 Harold Town joined a group of talented and avant-garde artists in Ontario that  eventually created a historical legacy in Canada. Town coined the name “Painters Eleven” for the group partly out of reaction to the more successful and publicly acknowledged “Group of Seven” artists. Town wanted to distinguish his group of abstract artists from the more conventional works of the “Group of Seven.”*

Harold Town thrived on seeing his Painters Eleven group acknowledged in the arts community and its patrons. He was their writer and propagandist, who in turn created opportunities for the group to be seen and heard. In 1954, Town had his first one man show at the Douglas Duncan Picture Loan Society Gallery in Toronto. In 1956, Town had the privilege of representing Canada at the Venice Biennale. His autographic prints of the 50’s won him international acclaim. Both the Solomon Guggenheim Museum and the Museum of Modern Art, New York, had acquired examples of these autographic prints.  Harold Town also participated at the international exhibition Documenta 3, Germany.*

Town created many successful, complex, and diverse bodies of work and some critics did not understand the depth and quality of his work. He was a painter without boundaries, his creativity and use of materials were limitless. Robert Fulford had commented that Harold Town was one of the two towering figures of his generation in Canada, alongside Michael Snow. Town had created masterpieces with all medium. His autographic prints of the 50’s won him international acclaim at the Venice Biennale. His drawings, collages, oils, and mixed media works have created his reputation as one of the most important Canadian artists of the twentieth century.**

Harold Town has had numerous solo exhibitions in museums and art galleries across Canada and internationally. Town also participated in a countless number of group shows nationally and internationally, often winning distinctions for his work.

Contact us to buy, sell or appraise artwork by Harold Town.