“For Curnoe, the London environment in which he has lived his entire life is shrouded in “the aura of the wonderful”. Objects, persons, places tend to glisten with meaning and become memorable to him” ~ Pierre Theberge, National Gallery of Canada, 1982 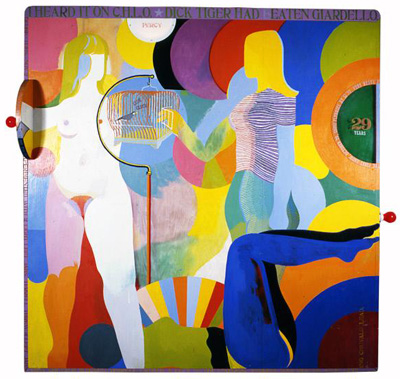 Greg Curnoe was an innovative Ontario artist well known for his mixed media approaches, including painting, sculpture, print, drawing, photography and video. Born in London, Ontario, Curnoe took his first art course in high school where he became aware of artists such as Jackson Pollock, Borduas, Dada, Surrealism, Kokoschka, the art of the insane, children’s drawing, James Joyce, and Albert Moravia. “Greg Curnoe’s early discovery of the Dada movement as an art student was a determining influence in his art career, and a confirmation of what he had already felt intuitively. On the exterior, the Dada movement was anarchistic, anti-establishment, delinquent, anti-academic, anti-bourgeois, anti-art, it was also very comic.”

Greg Curnoe’s interest in popular culture began early in his practice. He remarked, “After Tech I attended two art schools: The Doon School of Art and the Ontario College of Art. In both cases this was my first extended exposure to fine art in its narrowest sense, people who believed in a culture that had no connection with popular culture. I did not get along at these schools.” Curnoe returned to London in 1960 to create art using his own intellectual and artistic references, removed from formal “fine art” training.

When Greg Curnoe returned to London he founded the Region Magazine and in 1962 opened the Region Gallery with seven painters from the London district, including Jack Chambers, Tony Urquhart, Brian Dibb, Larry Russell, and Don and Bernice Vincent. These artists had different artistic styles and practices, but what brought them together was that they were young artists living in or around London.

Greg Curnoe was a strong presence in the London, Ontario arts scene. Curnoe emphasizes the importance of the Region Gallery in a letter to the Canada Council, “In the London area there are no commercial galleries. There was no place for painters to exhibit their recent work that was not a public institution. London’s official art circles, such as they are, are completely smothered by out-of-date sophistication. No person or group seems to realize that this city is not a cultural centre-it is a backwater. I and several others involved with Region believe that this is a good thing. Due to the media, most people’s eyes and ears are on radio, T.V, and newspapers, and never or rarely on where they are. We are not using regionalism as a gimmick, but rather as a collective noun to cover what so many painters, writers, and photographers have used – their own immediate environment, something we don’t do in Canada very much. Region gallery has encouraged some younger artists by showing their works.”

The essence of Curnoe’s work reflects his experiences of everyday life, rooted in his local environment. He expresses through the use of text in his works. His lettered works of the 1960’s were influenced by his love of comic books and children’s books in his childhood. Theberge comments that “for Curnoe, verbal representation gives life to the work, adds meaning to it, and completes it. In some works by Curnoe his pictorial language was only verbal, his verbal language, for its pictorial essence, could pass as an image.”

The artistic practises of lettered stamping in his works of the 1960’s continued and evolved through out the rest of his career. Greg Curnoe’s career blossomed, beginning in the early 1960s through the late 1970s, with major national travelling exhibitions, invitations to the Biennale de Paris, the Sao Paulo Biennial as well as the Venice Biennale. In 1967, he received a prestigious mural commission from the Dorval International Airport in Montreal. The mural, Homage to the R 34 was widely criticized and was later removed due to a great deal of controversy surrounding the mural. In the 1970’s Curnoe took up competitive cycling and images of the bicycle were explored in his later artistic works in the 1970s and 1980s.

Curnoe’s life was tragically cut short in 1992, when he was fatally struck by a truck while riding his bike with his cycling club. The Art Gallery of Ontario honoured Greg Curnoe’s pioneering career with a major retrospective exhibition in 2001 entitled “Greg Curnoe, Life and Stuff”.

Contact us to buy, sell or appraise artwork by Greg Curnoe.