“Art and life were to him synonymous and the compulsion to experiment continually in abstracting from nature to express his emotions in visual form.” ~ Helen Duffy, Frances K. Smith, The Brave New World of Fritz Brandtner 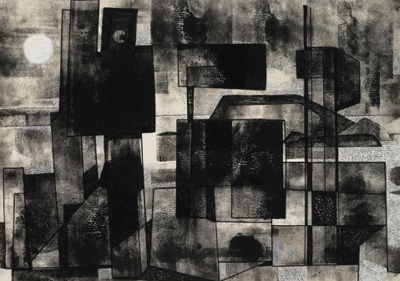 Fritz Brandtner  was born in Danzig, 1896. In 1920, Brandtner studied art and art history part-time at the University in Danzig, but was mostly self-taught. Brandtner taught life classes and acted as the Massier in the department of Architecture at the University, 1924-26. He worked as a commercial designer for advertising and display. He exhibited in atleast one documented art exhibition in Danzig, entitled “Young Danzig artists”.*

Fritz Brandtner left Danzig in 1928 and emigrated to Winnipeg, Canada. He worked as a commercial artist for Brigden’s of Winnipeg Ltd. He met several other Canadian artists such as Caven Atkins, Bertram Brooker, Lionel Lemoine Fitzgerald, Walter Phillips and Phillip Surrey.*

Brandtner moved to Montreal in 1934 and took work with Eaton’s display department for two years. In 1936, he became a co-founder with Dr. Norman Bethune of the Children’s Art Center in Beaver Hall Square. The school operated until 1950 working with children of underprivileged communities. Marian Scott, a contemporary Canadian artist in Montreal, took a teaching position with the school. In 1941-43, Brandtner became vice-president of CSPWC*

In 1939, he accepted the position of secretary at the Contemporary Art Society of Montreal right up until 1957. In 1944-48, Brandtner was the vice-president of CGP. In 1949-53, Brandtner acted as the director of the summer school at the Observatory Art Center, at the University of New Brunswick, Fredericton. Although, Brandtner continued to keep his residence in Montreal until his death. He continued to teach art classes and lecture in Quebec and Ottawa for the rest of his life. Fritz Brandtner made summer sketching trips to Gaspe and Nova Scotia until 1966. *

In 1960, Brandtner was elected life fellow of the International Institute of Arts and Letters. In 1968, he won the Canada Council Visual Arts award for his works in encaustic. Fritz Brandtner died in 1969.*

One can see the German expressionist and cubist influences in Fritz Brandtner’s work. However, he also was part of the artistic currents of Montreal in the 30’s and 40’s.*

Contact us to buy, sell or appraise artwork by Fritz Brandtner