“His paintings, figurative, abstract or calligraphic, are full of dashing energy.” ~ Joan Murray 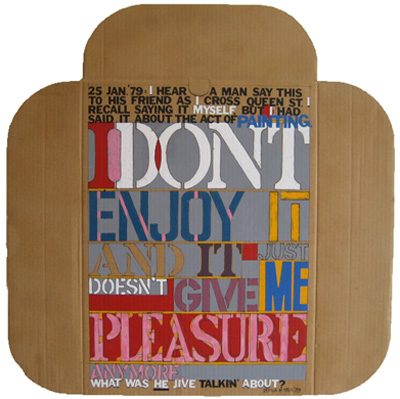 Dennis Burton is recognized for his abstract expressionist painting and his 1960s “Garterbeltmania” series. He had early critical success as an abstract expressionist artist. Burton was aligned with the famous Isaac’s Gallery artists of Toronto in the 195o’s and 1960’s, including Michael Snow, Graham Coughtry, Joyce Wieland, Tony Urquhart, Gordon Rayner, William Ronald, Richard Gorman and Robert Hedrick.

In the 1960’s, many of the Isaac’s Gallery artists turned to the figure as a theme in their work. Michael Snow repeatedly worked the “Walking Woman” series; Graham Coughtry looked to the “Falling Figures”; Joyce Wieland and Robert Markle worked on the female figure in their paintings; and Dennis Burton discovered his Garterbeltmania series, which won him a degree of national notoriety. In the 1970’s, 1980’s, and 1990’s, Burton explored mixed media painting, text paintings, and big, bold abstract painting.

Dennis Burton’s paintings have been collected and exhibited in many public and private collections including the National Gallery of Canada, the Art Gallery of Ontario, the Vancouver Art Gallery, the Southern Alberta Art Gallery in Lethbridge, the Glenbow in Calgary, and the Robert McLaughlin Gallery, as well as several other public institutions across Canada. Burton’s painting have been included in important survey exhibitions on Canadian abstraction at the National Gallery of Canada, including the exhibitions “Toronto Painting: 1953 -1965” in 1972 and “The Crisis of Abstraction in Canada, the 1950’s” in 1992.

Dennis Burton passed away in 2013 in Vancouver. He will be remembered as an important Canadian avant garde artist who played a significant role in the development of contemporary Canadian art.

Contact us to buy, sell or appraise artwork by Dennis Burton.