“Pellan’s pictorial universe is dizzying; it is fascinating in its diversity and complexity. Still there is a unity, an unquestionable unity – that of life itself in perpetual regeneration and proliferatio.” ~ Germaine Lefebvre, Pellan, 1973 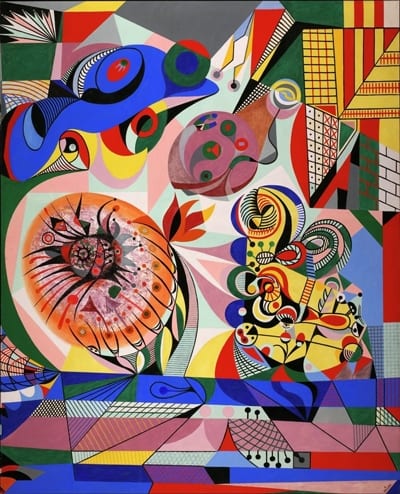 Alfred Pellan was born in Quebec City in 1906. He graduated from École des Beaux-Arts de Quebec in 1926. The same year he won a fine arts scholarship from the Quebec government. This scholarship allowed him the opportunity to study abroad in Paris at the École Superieure Nationale des Beaux-Arts. He lived in Paris until 1940 completing his studies in art, then moved to Montreal.*

In 1943, he took a teaching position at the École des Beaux-Arts de Montreal. His philosophy of teaching and promotion of free and progressive thought created conflict with the more conservative director of the school, Charles Maillard. This led to Pellan’s temporary resignation in 1945. From 1952-55 he went back to Paris using a bursary from the Royal Society of Canada. He was the first Canadian to hold a solo exhibition at the Musee d’Art National de Moderne, Paris.*

“The works of Pellan seem like curious and wonderful openings, inviting us to enter in a world which lies on the border between the real and the imaginary: or like magic casements, opening on a country view which startles us by its unexpectedness and strange effects. His limitless lyricism oscillates between the beauty of a lofty and solemn geometry and the ardent sensuality of a cosmic eroticism”*

Alfred Pellan was a significant figure in the history of twentieth century painting in Quebec. His first works from his early days in Paris exhibit a clear Fauvist influence. In the 1940’s work one can see cubist and surrealist approaches. Later, his work developed into his own unique style of painting.*

Pellan was awarded a large number of distinctions and prizes. In 1967 he was awarded the Companion of the Order of Canada. In 1984 he was awarded the Paul-Emile Borduas prize for his work. In 1985 he was made an officer of the National Order of Quebec. Throughout his career he participated in exhibitions all over Canada and internationally. . Pellan had exhibited in over one hundred exhibitions abroad, strengthening his international reputation. Pellan died in Laval, Quebec, 1988.*

Contact us to buy, sell or appraise artwork by Alfred Pellan.